The Chinese emperor seeking a new Prime Minister, challenged all of the children to bring in the greatest power in the world.  Some brought weapons.  Others said that the beautiful have t he power to get whatever they want and spent the year making themselves as beautiful as possible.  The brainy children pointed to the power of technology bringing examples of important Chinese inventions.  And, of course one group saw money as the path to greatest power.

After thinking long and hard, one child brought a seed.  When the emperor asked her why, she explained that when it is planted a seed produces a wonderful plant which produces food for now and more seeds for future plants.  It contains life which is the strongest power in the universe.  Of course she became the new Prime Minister. (The Greatest Power, by Demi)

Jesus tells us today about how we should live our lives. He says if we pay too much attention to the things of the world, then we’ll miss out on life.

What type of things might we pay too much time on which then makes us miss out on other things? (Let the kids answer)

Jesus says, ‘those who give themselves to the things I tell them about will have a great life, and will have eternal life’.

What things does Jesus teach us about? (Let the kids answer)

Alban gave us a great example in how he lived his life. He thought about others first, and protected Amphibalus the priest when the soldiers came looking for him. It was a dangerous thing to do, and Alban knew that, but it didn’t stop him.

The soldiers gave him the chance to save his own life by promising to follow the Roman gods, but he wouldn’t and he told everyone clearly that he believed in the one true God who made all of heaven and earth.

Alban stood for truth and bravery, he was selfless and caring. And that is why we celebrate him today. St Albans Abbey was built in his memory so that others could worship the one true God and be reminded of his example, and so that we continue to try and live better lives, so we can have the life that Jesus promises us. 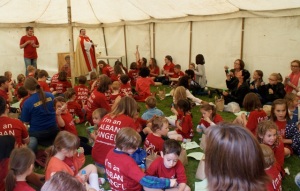 We also had bubble prayers 🙂